Who hasn’t enjoyed the morning TV coverage and excitement of our athletes going for gold at the Tokyo 2020 Olympic and Paralympic Games?

The new world records, the podium national anthems, the emotional celebrations, there’s so much to love about the Olympics.

The good news is that there’s lots more sporting and cultural action to get excited about, and it’s much closer to home.

The city and wider West Midlands will come alive throughout next year as the Birmingham 2022 Commonwealth Games rolls into town, bringing with it global TV coverage and thousands of extra visitors to the city.

Here’s the Staying Cool guide to the Birmingham 2022 Commonwealth Games.

When are the Birmingham 2022 Commonwealth Games?

The Commonwealth Games will be taking place right on our doorstep between Thursday, July 28 and Monday, August 8, 2022.

With 11 days of swimming and diving, eight days of cricket, eight days of gymnastics and seven days of athletics, including the marathon, the summer of 2022 is set for a spectacular home event.

Since the Games were awarded to Birmingham in December 2017, the city has hosted the IAAF World Indoor Athletics Championships, Badminton Open Championships and Gymnastics World Cup. Brum has hosted more European and World championships than any other city in the UK!

The Commonwealth Games was first held in Hamilton, Canada, in 1930, when 11 countries sent a total of 400 athletes to take part in the inaugural event.

Fast forward to 2022 and there will be almost 300 sessions across dozens of different sports, featuring more than 5,000 competitors from across the Commonwealth.

The Birmingham 2022 competition schedule features more medal events for women than men for the first time in Commonwealth Games history, as well as a fully integrated para-sport programme.

But that’s not all, Birmingham 2022 will also be a region-wide celebration of art and culture with an ambitious cultural programme described as ‘a once in a lifetime opportunity to positively disrupt the region’s cultural sector and inspire lasting change’.

Taking place over six months it will entertain at least 2.5 million people, setting Birmingham and the West Midlands in a new creative light.

Oh, and let’s not forget the official Birmingham 2022 mascot: Perry (named after Perry Barr) is a proper Brummie!

He’s described as ‘strong, kind and a little bit cheeky’ and will be seen by more than a billion people all over the world.

Commonwealth Games organisers are looking for more than 13,000 volunteers to be the heartbeat of the event and to help deliver the biggest sporting and cultural event the region has ever seen.

‘The Commonwealth Collective’ will represent the vibrancy and diversity of people at Birmingham 2022, a home Games for every nation.

Which sports take place at the Birmingham 2022 Commonwealth Games?

Birmingham 2022 will see the debut of 3×3 basketball and also bring wheelchair basketball into the Games for the first time. The event will also see the return of judo, alongside a whole list of elite athletics, aquatics, cycling, tri events and more.

Where is the Birmingham 2022 Commonwealth Games taking place?

The Birmingham 2022 Commonwealth Games is taking place across the West Midlands with Birmingham at its heart. The venues being used for the Games stretch from Coventry, Solihull, and Royal Leamington Spa to Cannock Chase Forest, Sutton Coldfield and Wolverhampton.

Birmingham’s Alexander Stadium in Perry Barr, pictured above, is at the centre of the action. The stadium is being rebuilt and will host all athletics events and the Games’ opening and closing ceremonies.

The Alexander Stadium reconstruction plans involve a new residential neighbourhood, redeveloped railway station and changes to major roads in the area to create a legacy for Perry Barr.

The beach volley ball takes place at Smithfield which guests at Rotunda will be able to see from their apartment windows. That said, you can’t beat a ringside seat!

What are the venues for the Birmingham 2022 Commonwealth Games?

Who is competing at the Birmingham 2022 Commonwealth Games?

You can expect to see stars from an anticipated 72 Commonwealth countries coming to Birmingham and the West Midlands, with the four home nations (England, Scotland, Wales and Northern Ireland) making it a total of 76.

Birmingham-born Myles Hesson, who currently plays basketball in France, will represent England in the 3×3 Basketball at the 2022 Games, while another Brummie with high hopes is gymnast Joe Fraser, the 2019 world champion on the parallel bars.

Staffordshire swimmer Adam Peaty is expected to be competing plus Cricketer Amy Jones, from Solihull, will be representing England in the 2022 Games, hot on the heels of playing The Hundred Cricket for Birmingham Phoenix.

In an interview with the event organisers, Amy said: “It’s absolutely brilliant that women’s cricket is taking centre stage at my home Games, and I can’t wait to compete for gold at the world-famous Edgbaston stadium, which also happens to be my home ground.

“I’m proud that Birmingham 2022 is giving women’s sport such a huge platform, and I have no doubt that it will inspire young girls in the West Midlands and around the world to follow in our footsteps.”

Is there an arts festival for the 2022 Commonwealth Games in Birmingham?

Running alongside the showpiece sports, a festival of culture will aim to double the reach of the sporting events of the Games themselves – reaching at least 2.5 million people and participants.

Artworks ranging from the playful to provocative will fill high streets, neighbourhoods, parks, waterways, venues and civic spaces of the West Midlands, across traditional art forms and more experimental mediums.

The cultural programme will encourage people to explore and play in public spaces, to discover the region’s heritage and offer opportunities for all ages to find the ‘common ground’ in Commonwealth, especially children and young people.

From March to September 2022, a six-month arts festival will encapsulate and explore the spirit of the Games, and give Birmingham its moment in the spotlight. It will reach artists and audiences across the West Midlands region.

Three simple themes represent the starting point. They are: Our place in the Commonwealth, The present moment and Stories of Birmingham and the West Midlands.

At the time of writing, the programme schedule is being confirmed, with the search ongoing for community groups to work with artists. Creative City Grants are available through an application portal at the Birmingham 2022 Commonwealth Games website.

How do I buy tickets for the Birmingham 2022 Commonwealth Games?

Tickets to the 2022 Games are being sold through a series of Ticket Ballots. The Main Ticket Ballot will open to everyone from 7 September. The West Midlands Ballot closed at the end of July.

Approved sales channels for Commonwealth nations will be listed ahead of the Main Ticket Ballot in September. Following the ballots any remaining tickets will be sold.

To apply for tickets to the Birmingham 2022 Commonwealth Games, you will need to create an official ticketing account at tickets.birmingham2022.com. By registering a ticketing account you’ll be the first to find out when the ballots open for applications.

Who is creating the Commonwealth Games opening ceremony?

Peaky Blinders creator Steven Knight is among the creative team that will deliver the opening ceremony for the Birmingham 2022 Commonwealth Games.

The event will take place at the Alexander Stadium on July 28th in front of 30,000 people at the stadium and a TV audience of 1.5 billion.

The same team will also produce the closing ceremony on August 8th.

The creative team in full:

Iqbal Khan – Artistic Director
A globally renowned, Birmingham born, Theatre Director. Most known for modern retellings of the classics and has worked in the UK and abroad on the world’s most high-profile stages.

Maeve Clarke – Writer
A published novelist and short story writer from Birmingham, Maeve’s credits include Whispers in the Walls, an anthology of new Black and Asian voices from Birmingham.

Joshua ‘RTKal’ Holness – Music Director
International rapper and music maker, Joshua has used music to unite and entertain audiences across the world. In 2018 he co-created a project offering music education and recording facilities to youths and underprivileged groups in Birmingham.

Where can I stay in Birmingham for the 2022 Commonwealth Games?

With the 3×3 basketball and beach volleyball taking place at Smithfield, just yards from Staying Cool’s Rotunda aparthotel, and artistic and rhythmic at Arena Birmingham, a short walk across the city centre near Brindleyplace, you’ll be perfectly placed to enjoy the sporting showcase by using our apartments and penthouses as your Commonwealth Games base.

Our stylish spaces are perfect for families to enjoy the once-in-a-generation event with spectacular views, minimalist décor, family games, speciality coffee, popcorn makers and fresh juice from your own juicer to set you up nicely for the sporting celebrations.

We’re expecting the period across the Birmingham 2022 Commonwealth Games to be a busy one, so we’d suggest booking in advance to guarantee the best seat in the house!

Birmingham 2022 organisers worked with Staying Cool and Rotunda to shoot a stunning video from our rooftop to raise awareness of the main ticket ballot opening.

Featuring king of the pommel horse Max Whitlock balancing on Rotunda’s roof, the brilliant video features some of Brum’s loveliest landmarks and a signature backflip from the Bull!

Fancy visiting Rotunda sooner? Bring the family and check out our Family Guide to Birmingham this Summer. If you love all things mod, retro or vintage, then you’ll love our guide to sixties Birmingham. Experience the best 60s venues in town, groovy baby!

There’s so much to see and do in Birmingham this summer with loved ones. We’ve prepared a Family Guide to Birmingham to tell you all about it. 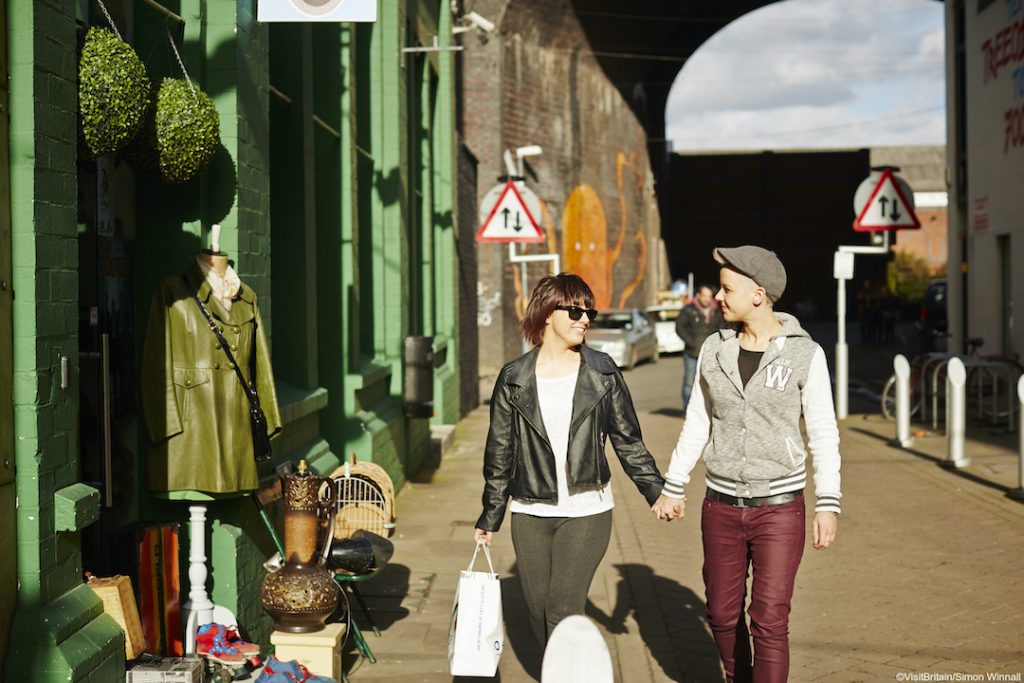 Everything you need to know about Digbeth, its history and the best places to visit.