The Michelin Guide has been putting restaurants through their paces for over a century. Michelin’s inspectors go to great lengths to remain anonymous, so they are treated as any diner would be and they have very exacting standards. We have five Michelin Star Restaurants in Birmingham.

Being awarded a star in the Michelin Guide is the ultimate ambition for many chefs. Birmingham has the highest number of Michelin-starred restaurants in the UK outside of London and that’s something that we are very proud of as a city.

So where can you eat that has the Michelin stamp of approval when you are staying with us at the Rotunda? As of autumn 2020, the following Birmingham restaurants can be found in the prestigious Michelin Red Guide for Great Britain and Ireland: Simpsons, Purnell’s, Adam’s, Carters of Moseley and Opheem.

A Michelin star for Opheem was announced by Michelin in October 2019. It is helmed by Saturday Kitchen star Aktar Islam who says that his mission is “to cook the food of Kings and Emperors.” We’re yet to eat at Opheem at the time of publishing, but we can’t wait. Aktar has also recently opened an Argentinian restaurant. Pulperia at Brindley Place in the city. It’s not Michelin-starred but still worth a visit.

What to expect: There’s five and ten course taster menus, complete with wine flights, giving you the chance to enjoy the full Opheem experience. The lunch a la carte offers an array of tempting dishes, including Chettinad Tamil (aubergine, bartha and stone moss), Meen Kerala (day-boat fish, greens and coconut milk) and the ever popular Kekda Kerala (soft shell crab, caraway seed tempura and crab) which was the winning course on Great British Menu.

How the Michelin Guide describes it: “There’s no denying this modern Indian restaurant makes a statement – and not just in its bold decorative style. Aston-born chef-owner Aktar Islam – who grew up working in his father’s restaurant – has created something quite unique, and his pride in having his name above the door is palpable.”

Glyn Purnell’s approach to cooking is bold and creative. His eponymous restaurant has held its Michelin star since 2009. The Yummy Brummie (Glyn’s Twitter handle) started cooking professionally at the tender age of 14 when he started working after school.

Glyn Purnell’s passion for cooking has led him to work on ‘stages’ or placements with chefs of the calibre of Gary Rhodes, Gordon Ramsay and Alistair Little. He has also travelled abroad, working for Michelin starred chefs in France and Spain. You may know his face from Saturday Kitchen and The Great British Menu.

Purnell’s is found in a lovely Victorian building in one of Birmingham’s historic conservation areas, close to St Phillip’s Cathedral. It offers tasting menus and has a private dining room available. The restaurant is within a few minutes’ walking distance of our Rotunda aparthotel.

What to expect: The restaurant offers tasting menus and a private dining room – and better still it’s only a few minutes’ walking distance from Staying Cool. Expect flashes of brilliance with Glyn’s signature Haddock & Eggs (which really does include Cornflakes), Cornish Stone Bass with langoustine and pepper bisque, and local Meriden Farm Lamb with tomato fondue and, goat yoghurt and aubergine.

How the Michelin Guide describes it: “Sophisticated cooking ranges from British to Scandic and uses a mix of classic and modern techniques. Flavours and textures marry perfectly and he shows his personality through some of his more playful dishes. Rather than a chef’s table, he has the ‘Living Room’, where he offers a selection of small plates entitled Brummie Tapas.”

Simpsons has held a Michelin star since 2004. It was created by Andreas Antona, Chef Owner and Luke Tipping, Chef Director. Simpsons’ head chef, Matt Cheal, joined the kitchen out of college in 2000 and has spent 15 years honing his skills with Luke’s guidance. Matt now runs a brigade of 14 and also teaches at the Simpsons cookery school once a week.Simpsons offers an excellent value lunch menu and also taster menus. With its private dining room, it could be a great choice for an intimate wedding reception or family celebration.  Children have their own three-course menu too. Simpsons is a taxi ride away from Rotunda in Edgbaston, but it is well worth the trip.

How the Michelin Guide describes it: “Simpsons has been part of the local culinary scene for over 25 years … Dishes are balanced and pure, with subtle modern touches and a pleasing clarity of flavour; be sure to try the signature tapenade bread rolls and delicious soufflés. Service is enthusiastic and brims with personality.”

The restaurant is the brainchild of Adam Stokes and his wife Natasha and it earned a Michelin star only six months after it opened in 2013. Head chef Adam brought a fine pedigree to Birmingham, which explains the speed at which the restaurant won recognition. Adam earned his first job as Head Chef at Glenapp Castle in Scotland aged only 27 and used locally sourced ingredients such as game, lobster and crab as his inspiration. His approach also won Glenapp a Michelin Star. The restaurant is also onSt Phillip’s Square, a hop, skip and a jump away from Rotunda.

What to expect: With a focus on seasonal fresh produce, the menus can change on a daily basis but dishes include such delights as Cornish Turbot with white asparagus and caviar, or  barbecued Squab Pigeon with maitake mushroom and served on a hot stone with smoking rosemary.

How the Michelin Guide describes it: “When it comes to the food, the assured, classically based cooking has modern overtones and a subtle simplicity, and luxurious ingredients are the order of the day. A great selection of homemade breads and butters are followed by accurately prepared, well-balanced dishes, where flavours are pronounced but true to the ingredients’ natural flavours, and there are appealing contrasts in texture and taste.”

Carters gained its Michelin Star in September 2015. Its strapline is ‘Simple. Affordable. Fun.’ and we can’t think of a better way to sum the place up!
The chef/proprietor is Brad Carter, who has a magnificent beard.

What to expect: The menus evolve on a daily basis to echo the natural rhythms of the season, opting to use native ingredients to create the most eye-catching dishes. Expect the unexpected with Trout and Scallop Roe, and a Colombian white chocolate pudding inspired by the famous Suffolk Street Queensway art.

How the Michelin Guide describes it: “It’s run by a friendly, engaging team, whose positivity is infectious and who will turn your visit into a real event. The set tasting menu lists ambitious and creative modern dishes, and the accompanying wines are natural, organic and biodynamic – and all available by the glass.”

Along with these big hitters, there are a number of restaurants in and around the city that have achieved a listing in the Michelin Guide this year:

About 8: “The modern L-shaped counter seats eight couples … The assured, original eight-course menu is presented by the chef in an engaging, theatrical style.”

Asha’s: “Extensive menus cover most parts of the Subcontinent, with everything cooked to order. Tandoori kebabs are a speciality.”

Chakana: “Cooking is punchy, vibrant and colourful, and dishes such as ceviches, tiraditos, and causas are perfect for sharing.”

Craft: “Vividly coloured modern British dishes are accompanied by British wines. You can also dine from a BBQ menu in a pod on the terrace.”

Folium: “The chef-owner of this little gem in the Jewellery Quarter … Flavours are bold and complementary, and the wine pairings are thoughtfully considered.”

Pulperia: “Choose prime cuts – many of which are designed for sharing – from Argentina, Finland and Galicia, which are aged for up to 50 days and skilfully cooked on the parrilla chargrill.”

The Oyster Club: “A good variety of top quality fish and shellfish also feature. The room is bright and elegant, with marble-topped tables, counter seating and a plush feel.”

The Wilderness: “A dark, moody restaurant with an open kitchen and pumping music. Choose between two interesting, tersely worded set menus of globally influenced dishes with a playful, showy style.”

Looking for a great place to stay in Birmingham? Enjoy our special offer

Want to taste Michelin-starred delights or funky street food? Staying Cool’s Rotunda serviced apartments are the perfect base to explore the best places to eat in Birmingham.

Book one of our chic serviced apartments using the code MICHELIN and enjoy 10% off your nightly rate.

Stay at our Rotunda Aparthotel to complete the Michelin Star Experience 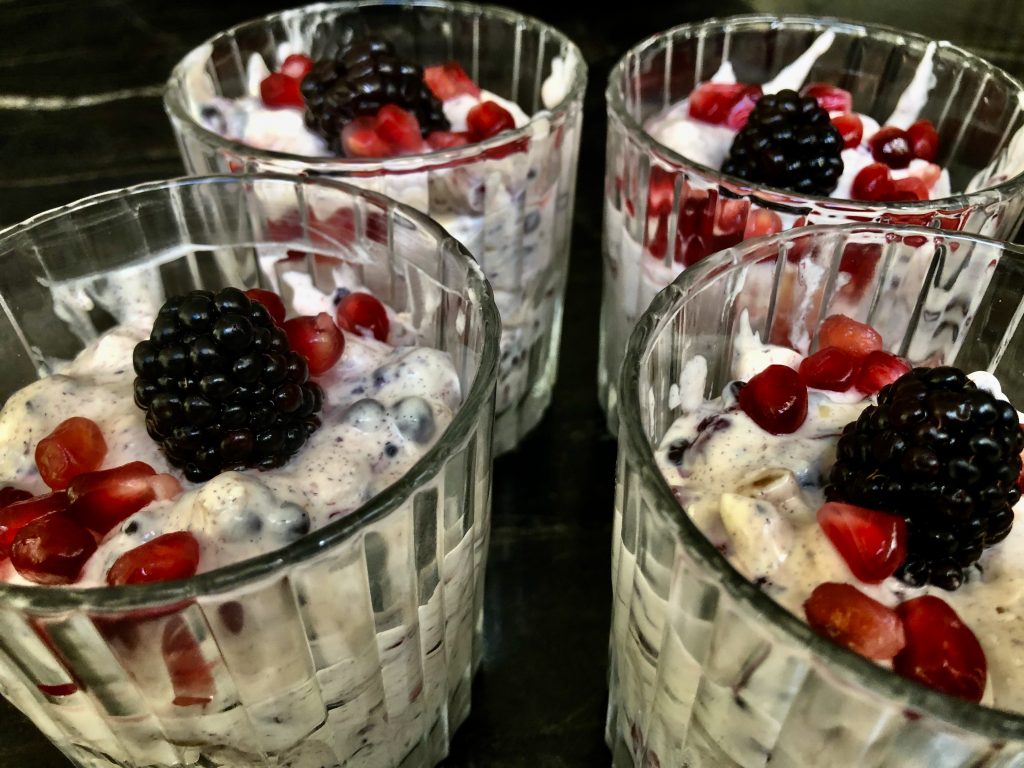 From the Cooking Cool Recipe Archive Some of you may remember that back in 2012 we launched Cooking Cool – all the ingredients to knock up your own two course dinner with a recipe designed by Alex Claridge, chef patron of Birmingham’s brilliant Wilderness restaurant and sometime Staying Cool executive chef. (How ahead of the […]